Your dentist is one of the first people you can trust when it comes to what you should eat and drink, so you know that Eight Shires Distillery has the perfect spirits for you! 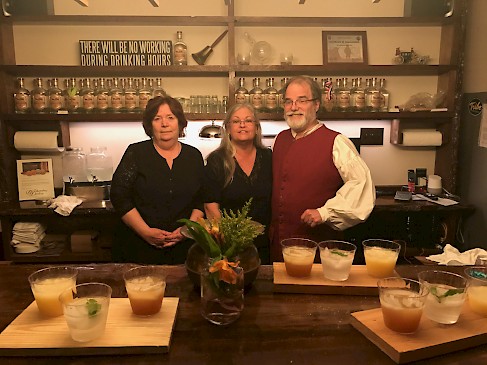 Eight Shires Distillery was founded by Dr. Bill Dodson, an endodontist. An endodontist is a dentist specializing in root canals and Dr. Dodson is one of the best, even known for fixing other doctors work. He has been voted a Top Dentist by his peers for 9years in a row! While dentistry is clearly an expertise the good doctor possesses, it is at best just one of his many skills. The others would be history and distilling.

Opened in October of 2015, Eight Shires Distillery has been ‘Distilling the American spirit’ by mixing history and distilling effortlessly and deliciously. Dr. Bill uses recipes that were written hundreds of years ago and includes types of base grains from the 1600s. The drinking room tables are decked with a number of colonial era board games that are an absolute blast! Dr. Bill is even working with master coppersmith Steve Eisenhart to complete a huge copper still based on one originally designed from Eisenharts great-great-great grandfather in 1750. Dr. Dodson really appreciates that Virginia is the birthplace of American spirits and is quick to share detailed histories on the subject. One of his favorite tales to share is that of the birthplace of Bourbon. While Kentucky may be famous for it now, Bourbon traces its roots right back here to Virginia! Namely to the recipe of one Reverend George Thorpe who wrote down his recipe for ‘whiskey with Maize’ at Berkley Plantation in nearby Charles City, just across the river from Williamsburg. Sadly, Reverend Thorpe was not able to brew much more of the tasty concoction he declared was ‘much better than English ale’ as his tactics to convert the native population to Christianity led to his violent death during the Massacre of 1622. Luckily his recipe lives on and when ‘whiskey from maize’ was first called Bourbon, Bourbon County was still part of Virginia, making Reverend Thorpe’s historic alcoholic legacy 100% Virginian.

There is Williamsburg Bourbon that is still sitting and aging to perfection. Sticking true to their love of Virginia history, Williamsburg Bourbon is based on Reverend George Thorpe’s original recipe from 1621. So, keep an eye on their website to see when you can try this ‘whiskey from maize’ for yourself.

If you’d rather not wait, you can stop in for a bottle of Jamestown gin today! While 20th century gin is vodka flavored with juniper and botanicals, Dr. Bill Dodson and the distillery keep it traditional by using instead using juniper with whiskey along with Virginia grains to create an old favorite that tastes brand new to modern pallets. Gin is very possibly the first flavored spirit and Jamestown Gin won Double Gold at the MicroLiquor Spirits Competition in 2016. 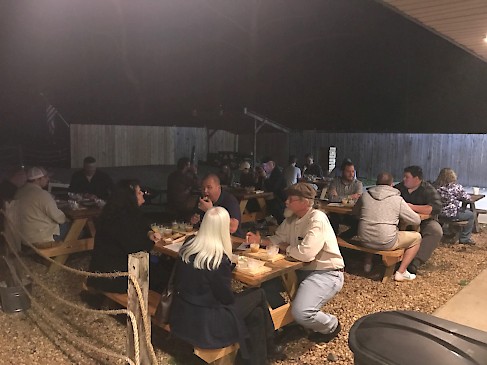 All of the whiskey bases for Eight Shires Distillery alcohols are made with American Maize, also known as Indian corn. The corn is grown locally on Algonquin tribal grounds. They are the only alcohol producer currently using this ingredient. You can really taste the difference.

Tastings at Eight Shires Distillery re free but what you really need to try are their flights. You can mix up to 9 modern and historic cocktails with your choice of rum or gin to make your perfect combination. Try the Stone Fence, a historic cocktail with apple and spices designed to instill courage during battle or try a cold and refreshing ice-cream cocktail or a light and fruity Aunt Yvonne with strawberry and kiwi named for Dr. Bill Dodson’s wife. Whatever your flavor preferences, the bartenders at Eight Shires Distillery can mix it up right! Just don’t ask for a rum and coke in the presence of Dr. Dodson himself, trust us. If you have a designated driver or persons under 21 with you they can still get in on the good time by trying a non-alcoholic flight.

If you can’t find the time to go into Eight Shires Distillery itself, which is a real shame, you can still pick up a bottle of their tasty rum at many local ABC stores. You can also check local bars. If you see a mini-barrel with WD burned on the end sitting on the bar, then you know they offer at least one Williamsburg Distillery spirit. Some restaurants including The Whaling Company feature Eight Shires Distillery in their signature cocktails so you know you’re going to get a tasting experience as local as local gets. 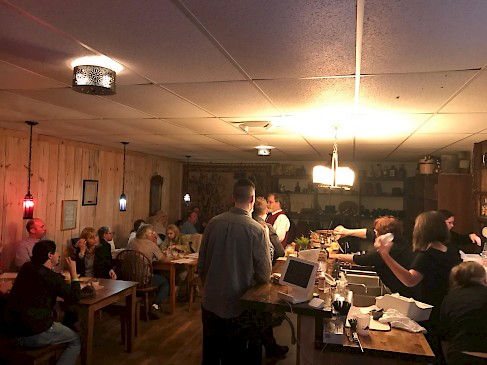 While Dr. Bill Dodson has been quoted as to his intentions to move Eight Shires Distillery to larger and more permanent location, their current one is rather charming in itself. Inside the distillery sports a large production room decorated with American and state flags through the centuries. In the production room Dr. Dodson tours guests and invites them to see the steps of production and hear the history of both the brew and the displayed flags. He may even let you try a taste of ‘White Dog’ whiskey which is not for the faint of heart. The tasting room is decorated with comfy wood furniture with lots of colonial games to play while the bartenders whip up your custom cocktail flight. Dr. Dodson loves to regale waiting guests with historical facts and anecdotes. They even offer the occasional historic dance lessons here. In the tasting room you can also purchase t-shirts, cups and other Eight Shires Distillery merchandise sure to be an easy conversation starter. Outside has a number of picnic tables and hosts food trucks, so you can pair your expertly prepared cocktails with tasty and trendy treats.

For the perfect mix of modern tastes, historic recipes and friendly face Eight Shires is sure to be a favorite from the first taste to the last.

We typically meet at Joker Brewing

After drinking with us, get spooked on a Ghost Tour of Williamsburg!

Have a look at these amazing Tours as well